A backlash in the shires 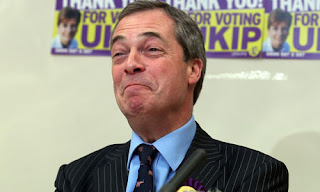 It has been a truly dreadful day for the Coalition with both the Conservatives and Lib Dems suffering significant losses.  Labour has clawed back some support from its nadir in 2009 but the clear winners are UKIP who have demonstrated a national appeal that is lacking among the mainstream parties.

UKIP did well because a) the stakes were low so it was a risk free protest, b) the Lib Dems no longer represent a useful protest vote and c) all three main parties have lost the trust of voters.  They are now in a position to go on to win the popular vote at next year's European elections and shake the political establishment to its core.

In the short term, UKIP's rise has three big political implications:
Local elections are generally over analysed by political commentators.  Once the articles have been written, and the TV punditry dries up, politics gets back to normal as the realisation seeps in that they were no more than the voters giving the national party of Government a slap on the cheek.  The question now is whether the UKIP threat will recede or whether yesterday's poll, and the Rise of the Kippers, marks a sea change in British politics.

A couple of years ago, the conventional political wisdom was that the Coalition (and the unpopularity of the Lib Dems) would return Britain to two party politics.  No longer.  The next election is now likely to be a four party affair.  And because of the inequities of the first past the post system, it is even possible that with the Tories, Lib Dems and UKIP chasing the centre right/right vote, Labour could secure a comfortable majority with less than 30% of the popular vote. 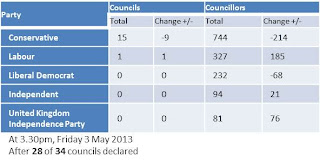