The announcement by the Coalition Government to re-localise business rates – well at least to allow councils to retain the business rates from new commercial development – will be welcomed by the local government fraternity.

It should also be welcomed by the development world.  There will now be a financial incentive for councils to approve commercial development, in the same way as the New Homes Bonus incentivises new house building.  And by preventing councils from increasing the business levy, there is a reassurance that there will be no return to the 1980s when socialist town halls piled up the tax burden onto the business owner.

But it is a bold and brave decision by the Coalition, particularly the Liberal Democrats.  The major beneficiaries will be those areas that attract new businesses, predominantly the more affluent south.

The London Borough of Westminster collects 6% of the country’s entire business rates.  Every time a new Gherkin or Shard goes up, they will be cashing in.

A new political narrative is emerging that we have a Tory government, propped up by the Liberal Democrats, which is favouring the south over the north.  The Liberal Democrats paid a massive price for this at the recent local elections, suffering huge losses in the northern cities.

Despite Nick Clegg’s assertion that the localisation of the business rates will be fair, it is difficult to see how any system can be implemented which won’t favour those areas which are already attractive for business to locate.

What are your thoughts?  Do you think re-localisation will give councils more incentive to support commercial development?  Which areas will be the main beneficiaries?
Posted by Wyn Evans at 7:31 PM 1 comment:

Will there be a public backlash against the New Homes Bonus? 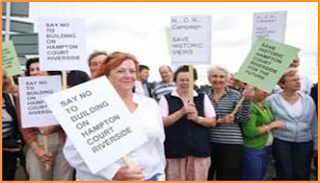 Britain desperately needs to build more homes.  A recent YouGov poll found that 81% of Britons accepted this.  The problem is that they don’t want them built in their own neighbourhoods.

The Coalition Government is pinning its hopes on the New Home Bonus.  It believes that by giving local councils’ financial incentives to support development, communities will come round to the idea.  Asked what Plan B is if it fails, one minister replied that they will simply increase the Bonus.

I’m a big supporter of the New Homes Bonus.  I have seen at first hand schemes approved that would have definitely been thrown out under the old regime.  But I have also seen its drawbacks.

About six months ago, I was brought in by a developer just two weeks before committee.  The scheme was recommended for approval by officers but had generated over 1,800 objections.  Ordinarily, the application would have had no chance.  However, the site was located in an opposition held ward and the New Homes Bonus brought the council the promise of a £7.5m windfall.  Despite there being 400 objectors packed into the public gallery, the councillors from the ruling group voted it through.

I was so impressed at the power of incentives, that it became a central feature of the next consultation I ran.  We asked the public how they would want the New Homes Bonus spent?  But far from winning people over, it triggered the accusation that we were trying to buy and bribe our planning permission.

This could become the New Homes Bonus’ Achilles heel.  In using the incentives’ package to justify development, councils will antagonise local resident groups.  Far from winning over community support, it will provoke further cynicism about the planning process.

In three years’ time, it might be Labour that is hoovering up the NIMBY vote by promising to abolish the hated New Homes Bribe.

What do you think?  Will the New Homes Bonus help build more homes?  Will it help win over local communities to the need for more housebuilding? Or will it be seen by the public as an unacceptable bribe?

Wyn Evans is the Founding Director of Forty Shillings.
Posted by Wyn Evans at 4:57 PM 2 comments:

Guest Blog: the end of the Thatcherite consensus?

Just like buses, major political events often come in threes. This week has seen the near-collapse of Southern Cross, the care home provider, a survey by Halifax which revealed that 64 per cent of 20-45 year olds questioned do not believe that they will get on to the property ladder in the next five years, and growing concern by leading economists that the Government’s deficit reduction strategy is damaging the economy. These three events are significant because they undermine the Thatcherite political consensus which has prevailed in Britain since 1979: the private sector can be trusted to run public services; home ownership is within everyone’s reach; and cutting public spending is the best way to help an economy grow.

Southern Cross – Britain’s largest provider of care for elderly people with 30,000 residents in 750 homes – is in serious financial trouble (current half-year losses are £311m) because its rent payments have increased by 2.5 per cent whilst local authorities have cut spending on social care by 10 per cent thus reducing their income sharply. The company was owned up to 2006 by the private equity firm, Blackstone, which pursued a strategy of buying care homes then selling them and relying on fees to cover the rents.

This business model – like the other one favoured by private equity during the credit boom, taking on huge debt – now looks bust, and provides yet another cautionary tale about the risks involved in bringing in profit-making companies to run essential public services. Yet the Government is ploughing on with allowing “any qualified provider” to run health services, as part of its disastrous NHS reforms. There is very patchy evidence regarding the private sector’s ability to improve the quality of services yet right-wing think tanks like Reform, and former New Labour ministers and advisers, such as Lord Warner and Julian Le Grand, insist on greater competition in health care.

The Halifax survey of 8000 20-45 year olds was a depressing reminder that the UK housing market has huge barriers for first-time buyers with property prices still far too high, lending criteria far too strict, and young people far too unlikely to have the requisite savings to put down a deposit. The average age for a person to get on to the property ladder without parental support is now 37.

One of New Labour’s great failures was to reverse the trend of the Thatcher era and build enough homes (especially of the affordable kind) to meet the needs of the population, which would have helped to put downward pressure on house prices. It is something that the Labour leader, Ed Miliband, needs to address seriously if he is to deliver on his concept of the “British promise,” that the next generation does better than the last.

It has taken an awfully long time, but some of the country’s leading economists have finally realised that the Government’s savage public spending cuts will severely hamper Britain’s already faltering growth prospects. In The Observer today, a number set out their worries as consumer spending falls, business investment declines, and exports stagnate – whilst unemployment and inflation are high, and government borrowing is up by £46bn.

Tim Besley, a former member of the Bank of England’s Monetary Policy Committee, who organised a letter to the Sunday Times last year supporting the Coalition’s deficit reduction programme, said, “Everybody has been disappointed with growth……I would like to see from the Government …a much more clearly defined growth strategy.”

Professor John Muellbauer of Oxford University, who signed the letter to the Sunday Times, said, "Things are going badly. I had hoped that the focus in the Budget would be on improving growth in the places where there are growth prospects, and also maintaining infrastructure investment, and that they would tackle failures of planning."

It was perfectly obvious to those of us with less economic credentials than Mr Besley and Professor Muellbauer that George Osborne’s massive gamble of reactionary cuts and tax increases when the economy was clearly still fragile was doomed to failure. Nearly all independent economic bodies, including the Office for Budget Responsibility and the OECD, have revised their growth forecasts for the UK downwards, a damning indictment on Mr Osborne, who has consistently lied to the public about the causes of the budget deficit and the rationale for his unnecessarily deep cuts.

Margaret Thatcher famously proclaimed that there was no alternative, and the Labour Party pretty much concurred with her during the Blair-Brown era. In light of this week’s troubling developments, there has never been a better time for Ed Miliband to start articulating clearly and passionately how he would do things differently if he reached No 10.

Jayant Chavda is a freelance political consultant and a former Labour Party researcher.
Posted by Wyn Evans at 10:53 PM No comments: